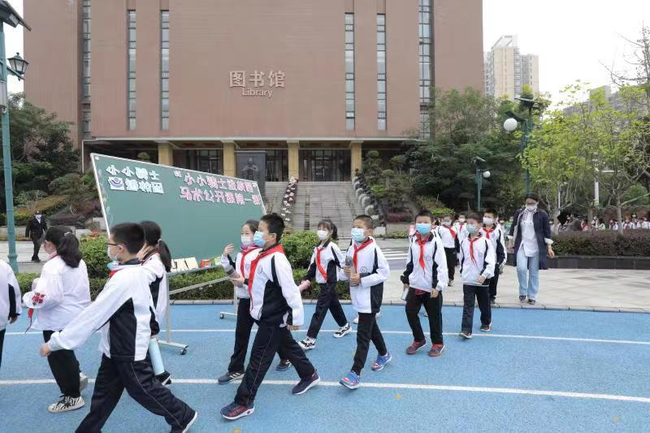 After all the calls came out, the dream of riding a horse on the grassland on the campus finally had a chance to come true. On the afternoon of September 23, the pilot of the "Little Knights Entering Campus" equestrian public class was officially launched at the Evergreen Experimental School. It is reported that this is the first time in the country that the equestrian event of a public welfare nature has entered the campus.

The organizer of the event was the relevant leaders of Wuhan Education Bureau, Wuhan Sports Bureau, Wuhan Radio and Television (Group), Hubei Equestrian Association, Wuhan Equestrian Association, Wuhan Business School International Equestrian School, Dongxihu District Culture and Sports Bureau, the central and provincial, Local media representatives at all levels in the city, as well as the principals of 26 pilot schools of the "Little Knights on Campus" equestrian open class attended the launching ceremony and watched the first lesson of the open equestrian class on the spot.

It is understood that the Wuhan Municipal People’s Government has decided to carry out equestrian sports education in primary and secondary schools in the city, enrich school sports activities, actively promote the safe, orderly and extensive development of equestrian education, and improve the overall quality of students. The Wuhan Municipal Education Bureau, Wuhan Municipal Sports Bureau, and Wuhan Radio and Television Station (Group) jointly issued a document to carry out the pilot work of "Little Knights Entering Campus" equestrian public classes in some primary and secondary schools in Wuhan. To fifth grade students.

The organization of the event takes safety as the primary consideration to ensure that the entire event is carried out in a professional and safe environment. It is understood that the pilot school should conduct safety education for all students participating in the open equestrian class, and the event executive will purchase accidental injury insurance for the students participating in the open equestrian class outside the school.

At 2:05 in the afternoon, six horses lined up on the school playground. More than 500 teachers and students of Evergreen Experimental School boiled and cheered. Afterwards, student representatives from the Evergreen Experimental School, students from the International Equestrian School of Wuhan Business School and the little knights lined up into the playground to perform wonderfully. During the performance, the shouts of the teachers and students resounded throughout the equestrian show. The reporter saw at the scene that the students were very excited and could not help exclaiming from time to time. Many children had bright smiles on their faces.

After the kick-off ceremony, the long-awaited first "Little Knight Enters Campus" equestrian public class officially began. First of all, the host of the Children's Channel of Wuhan Radio and Television Station and the lecturer of the International Equestrian School of Wuhan Business School gave the students a detailed introduction to horses. In the ensuing questioning session, the students made no secret of their love for horses and raised their hands to answer. There were also many lucky students at the scene, who were called on stage to answer questions, and they were also "zero distance" close to the horses by feeding them carrots. ...

Parents who came after hearing the news said that the incident of equestrian entering the campus is almost like a dream. They can't even think about it. Moreover, the children can touch it at such a close distance. The children must be very happy. Wuhan The elementary school students are so blessed.

According to the person in charge of the Sports, Health and Arts Department of the Wuhan Municipal Education Bureau, this activity has been exploded once it spread on the campus. The students wanted to participate and the enthusiasm was high. The teachers also raised their hands in agreement, saying that it would benefit the students Physical and mental health, temper the will to bear hardships and stand hard work. This activity will effectively promote the development of campus sports activities and improve the physical fitness of students. The equestrian public class will be piloted in 26 primary schools in 7 districts including Jiang'an District, Jianghan District, Qiaokou District, Hanyang District, Wuchang District, Dongxihu District, and Zhuankou Development Zone this year.